What outcomes are you trying to achieve? What evidence do you have to suggest that the features you’re building will actually matter to customers? How does what we’re building align with the wider strategy of the business?

Feature factories is the term people use when they’re working at a company who’s idea of product strategy is putting a spreadsheet together with a shopping list of items that need to be delivered with a few dates slapped next to them.

But as real as these frustrations are, it’s also worth asking: what if features actually do matter?

The value of features

North star metrics, OKRs, lean startup methodologies, opportunity diagrams and all the other frameworks are no doubt extremely valuable, but the downside of obsessing about the latest product toolkits and behavioural models is that they can result in teams with an unhealthy focus on theory over practice. They’re addictive. And stimulating. But by themselves they produce little.

Building things should mean you’re adding value. If the features you’re building aren’t valuable, or if you’re unable to determine what’s valuable to your customers, then that’s a real problem. Product managers and product leaders should have an inherent sense of what’s valuable to customers. If a product person isn’t equipped with the ability to sense what might be valuable to others, product management might not be the best career choice in the first place. It sounds a little harsh but it is genuinely difficult to build things people want without strong empathy skills. 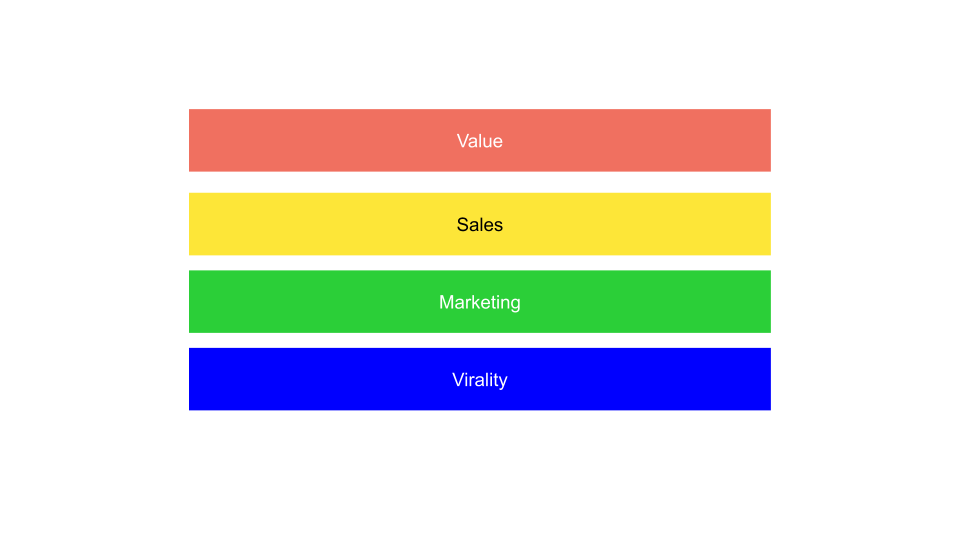 The question of what to build lies at the heart of product strategy and features are a reflection of those decisions.

But when you delve a little deeper, you’ll notice that product features impact the entire value chain of a business or product:

The pushback against the idea of becoming a ‘feature factory’ comes when what’s being built seems pointless or the process of deciding what’s to be built feels top-down. It’s also not true to say that the more features, the better the product. We’ve all used products which have so many features that you’re left feeling nauseous at the end of trying to do something simple.

Despite that, there is a strong argument to say that a product with more valuable features built in a way that enhances the overall user experience is all the more stronger for it.

One way to demonstrate the value of features is to look at what happens when valuable features are missing from a product.

In November 2019, Adobe shipped the iPad version of Photoshop. Adobe’s Chief Product Officer, Scott Belsky, said at the the time of the launch:

a real-time v1 lesson: you’ve gotta ship an MVP to start the journey, but it will be painful at first. by definition, it won’t please everyone (and if it’s a reimagination of a 30yr old popular/global product, will displease many) pic.twitter.com/LaJ6oJlwcD

The feedback on the first version of the app was brutal. Why? You guessed it. It was missing critical features:

These were just some of the features missing from the iPad version of Photoshop. And the product team responsible got some pretty brutal reviews in the process.

Whether we like not, digital products deliver value through features.

If you’ve ever sat in on a sales meeting with a client, you’ll know what happens in a typical product demo.

You grab a coffee, exchange a few pleasantries, demo the product’s functionality and then wait for the onslaught of questions to come from your potential customer. Commercial questions aside, the predominant theme in questioning is usually directly linked to the features offered in the product:

As many product marketeers know, anchoring plays a big part in how the value of a product is perceived.

For SaaS products at least, pricing tables are the predominant way of presenting your product’s value and pricing back to users before they buy. 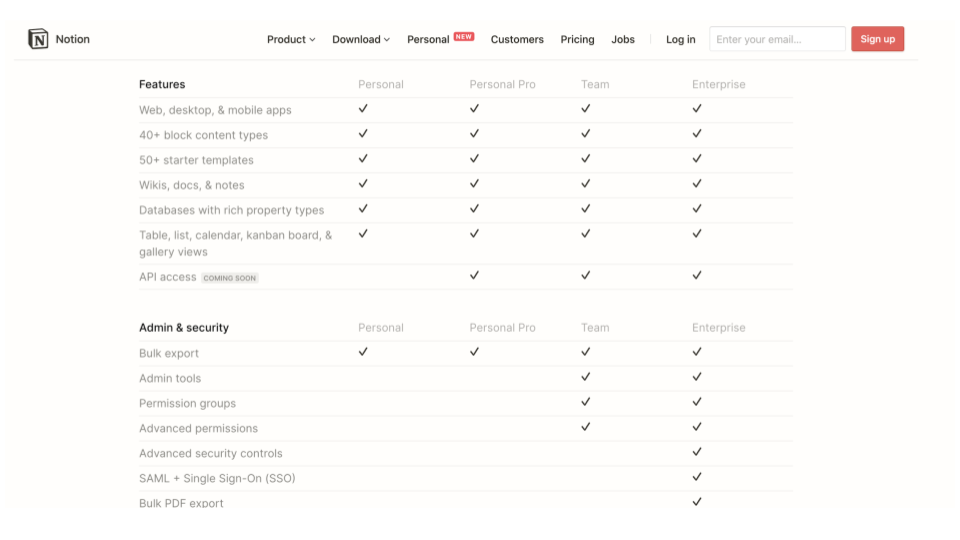 Features act as a powerful lever in nudging people over from one package to the next. Using a feature comparison matrix as a tool for doing this is only possible when you have enough features at your disposal. 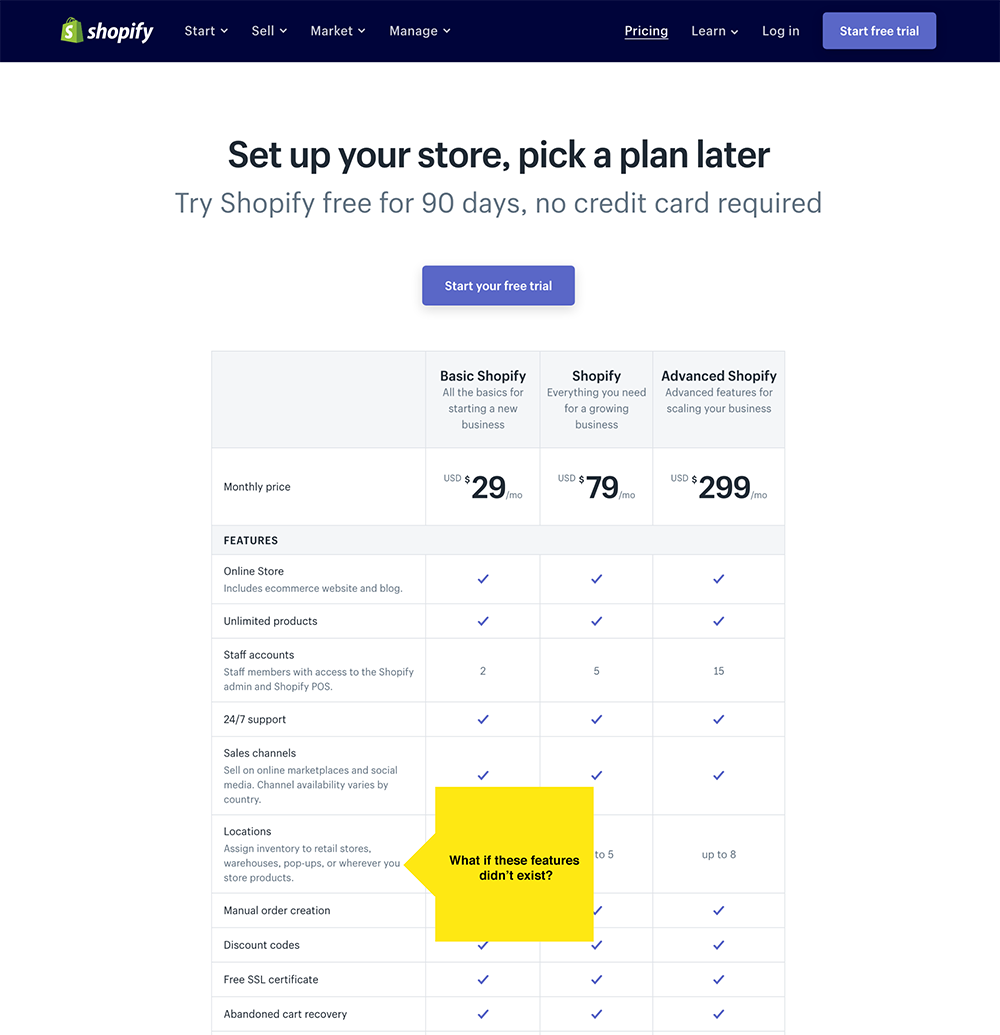 It’s simply impossible to create the pricing matrixes used in SaaS sales without building them. Features, you could argue then, are what drives revenue for SaaS products as enterprise customers shift packages to get access to more of the features they need, reducing the feature deficit they experience on a lower end package.

‘Features and benefits’ is the mantra of marketing copywriters; a strong marketeer will pick a feature, extract its core benefits and weave the two together in a seamless expression of the value a feature creates.

Here’s how Apple advertised its latest version of iPadOS in 2019 for the iPad Pro:

iOS and iPadOS get more valuable as new features get added and old ones deprecated. Praise is given for new, innovative features, criticism is directed at badly executed or missing features. For every FaceID there’s an iTunes Ping (remember that?!).

And here’s an example from back in 2015 of PayPal advertising its product:

The NPS question ‘How likely are you to recommend X to a friend’ rarely results in a product actually being recommended to anyone.

Viral loops can propel a product to hypergrowth, but it starts by building things worth sharing.

Zoom backgrounds might struggle to get through some awkward corporate prioritisation matrix but they improve the shareability of Zoom.

I remember when I first used Citymapper; I couldn’t quite believe what I was seeing. I could do crazy things like save my home address as ‘home’ and then plot my journey to a fresh destination, filtering by different travel options. At the time, back in 2014, this was so much easier than having to navigate around using Google Maps. I recommended the app to lots of friends and family. Without those features I probably wouldn’t have.

But, as Citymapper found out as time went by, feature-based differentiation doesn’t last forever.

The dangers of feature-based differentiation

All at the same time.

Product strategy and the question of feature depth vs. breadth

Aside from the ways in which features link directly to your value chain, there is a wider strategic question to consider. The question for product managers particularly, is one of feature depth vs breadth.

The depth vs. breadth debate is more common for startups to consider than larger corporates. Products that focus on depth will choose a few features and drill down heavily into those to make them as exceptional as possible. A few things done well. The hope is that by focusing on the most valuable problems that are worth solving for customers, users will forgive you for not having the complexity of incumbents. 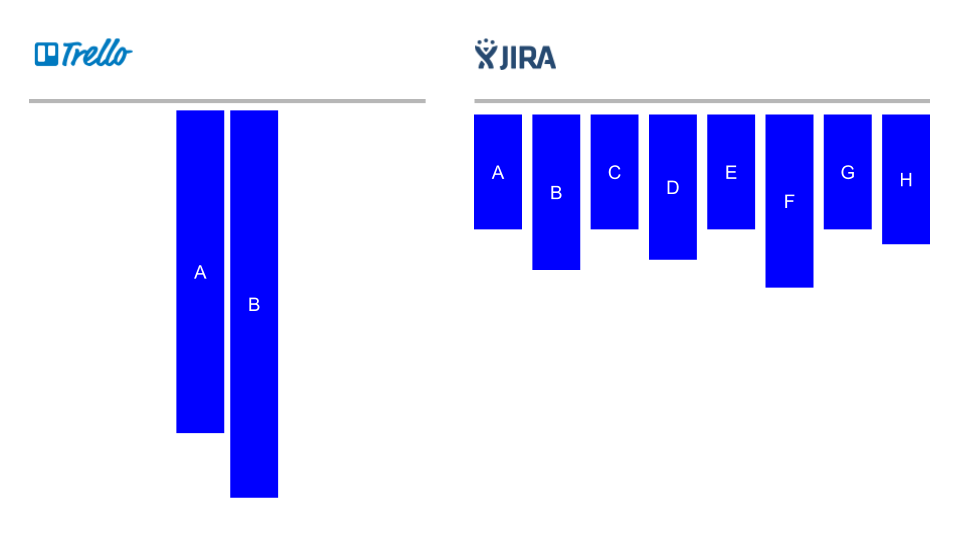 Trello does a few things really well. It lets you build a kanban board with a simple card view. Most of the functionality of Trello is hidden deep inside a card. And you can keep travelling deeper and deeper into the functionality of a Trello card. You don’t care that it doesn’t do much else, in fact you respect it for doing less.

Jira, on the other hand, has not just a view of user stories, but also hundreds of other features. And something called JQL. Power users love the breadth of things on offer, others finding overwhelming.

The race to reaching feature parity 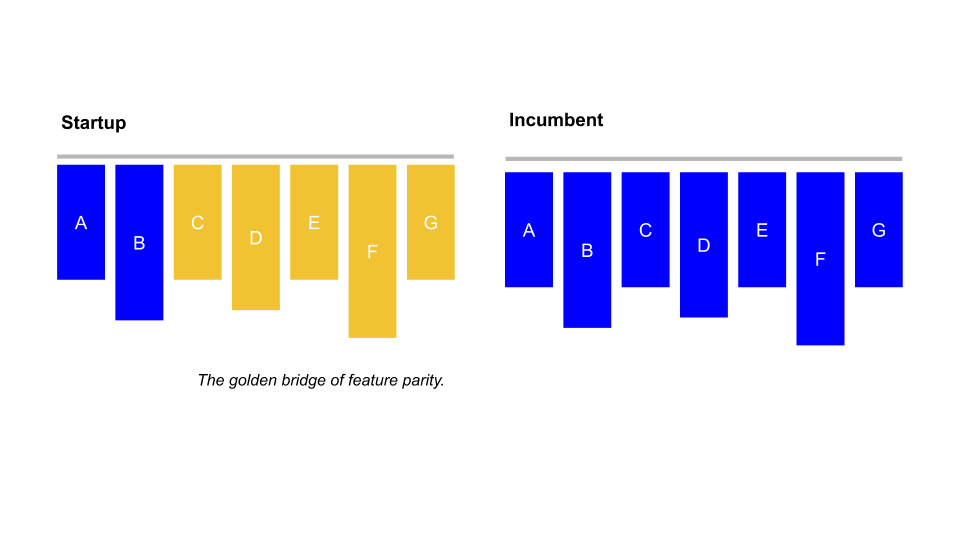 For startups, there is an understandable tendency to try to reach feature parity as a way of competing. ‘Once we reach X numbers of features we’ll be on par with our competition and we’ll win’. That may be true if you’re Google or Amazon. Google has spent a large part of the last decade doing just that, in fact. Cloning the best bits of Microsoft’s Office Suite, offering it for free and even adding new features to it as it does so. But most companies aren’t Google.

And your attempts to build your way to feature parity with your competitors will likely fail.

Smaller companies are far better off picking a few forms of value and focusing on them incessantly, by approaching things a little differently. The problem with playing feature parity catch up is not just lack of resources; it assumes your competitors are sat idly waiting for you to catch up. What if they’re not?

The whole point of this post wasn’t to dismiss the dangers of a feature factory; there’s nothing more soul destroying than churning out features at the behest of some exec without any strategic vision, but rather to attempt to redress the balance between theory and execution a little. Some organisations place so much emphasis on the theory of product management that the art of getting stuff done gets lost along the way.

Yes, nobody wants to work in a feature factory where you’re measured by the number of new shiny things you can ship in a quarter. But equally, if you’ve spent the last 3 months perfecting your product vision statement with nothing to show for it, you might just have been better off producing some features in the factory after all.