Why is Slack popular?

Go to any conference and you’ll notice 1 thing: a small, but substantial number of hyperactive humans aren’t fully present at the conference. They’re physically in the room but they are far, far away. Where are they? They are on Slack. Typing to the colleagues they spent $900 to get away from for 1 day.

It’s madness, but it does tell us 1 thing: Slack is disgustingly popular.

The question that springs to my mind is ‘why?’ Why is it, that 1 particular workplace messaging tool suddenly seems to be one of the most commonly used applications by tech professionals on a daily basis? The life of Slack so far

Slack was founded in 2009, so in the grand scheme of startups it’s actually been around for a little while now. 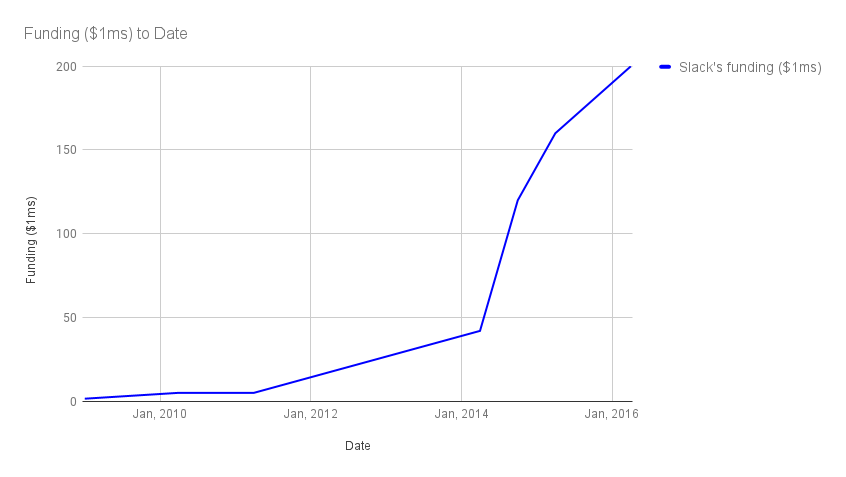 It has raised over $500m to date and is on course to raise more, with an eye-watering valuation of over $5bn. This is one of the many reasons Slack is popular: it has simply outpaced its smaller rivals in funding terms. As competition increases, out-funding your competition is certainly one way of winning.

Comparing Slack’s metrics to larger competitors, however, Slack is miniscule. Slack has an estimated user base of 5m (as of 2017). Facebook’s 2bn+ dwarfs Slack in sheer user numbers. As you’d expect.

Facebook, Google, Microsoft and the other tech titans beat Slack on distribution alone but Slack appears to be winning on one key dimension: engagement.

Sure, you can bundle in Skype for Business or Google Hangouts with an Office 360 package and a Google app, but if your app isn’t getting used as deeply or as frequently as your competition, that’s telling.

The more your company uses Slack, the more dependencies you create:

Slack starts life as a seedling in your organisation but gradually blossoms into a powerful tree, deeply rooted into your company’s day to day functions; without Slack your company wouldn’t feel or function the same and so over time your businesses becomes dependent upon it. 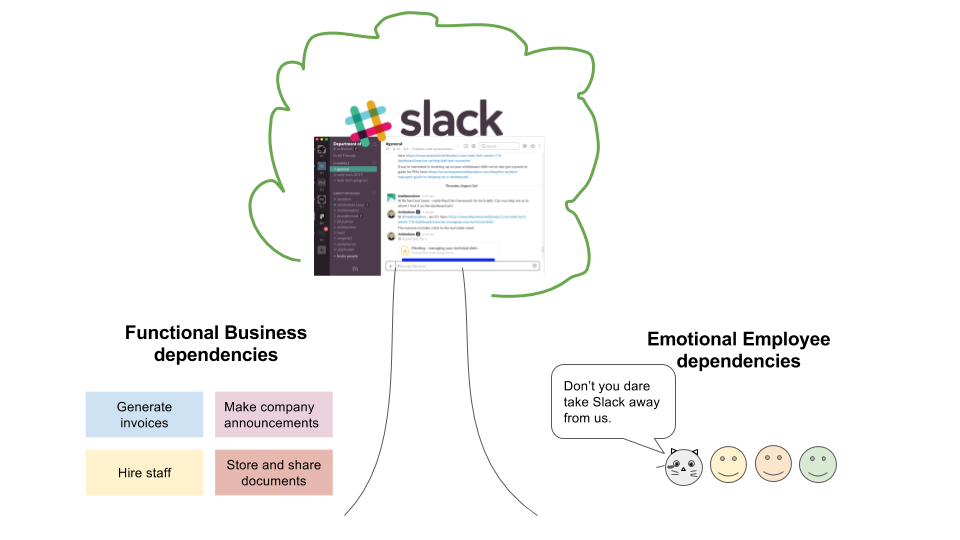 This deep relationship is in part due to the functionality that Slack provides, and more specifically – the jobs that Slack does.

We’re on a mission to make your working life simpler, more pleasant and more productive.

Simpler, more pleasant and more productive, hey? Sounds wonderful. But does it deliver on this promise?

The Jobs that Slack Does

Slack’s core value proposition is a comms tool. A communication tool which specifically facilitates communication in the workplace. It’s easy, to come up with a basic functional list of the jobs that Slack does:

As a functional piece of software, it’s clear that Slack performs these tasks extremely well. As offshore development teams in startups and working from home policies exploded, Slack was well-placed to surf the wave of this trend rather nicely. Bravo.

But the Slack effect goes much deeper than that.

The emotional jobs that Slack does

1. Slack as a status symbol

‘Oh you guys don’t use Slack? Poor you. I guess your company sucks. And I wish you all the best with your tragic career.’

I’ve never seen a piece of software which performs such a banal task (communicating with your coworkers) be used as a status symbol before. Until Slack. 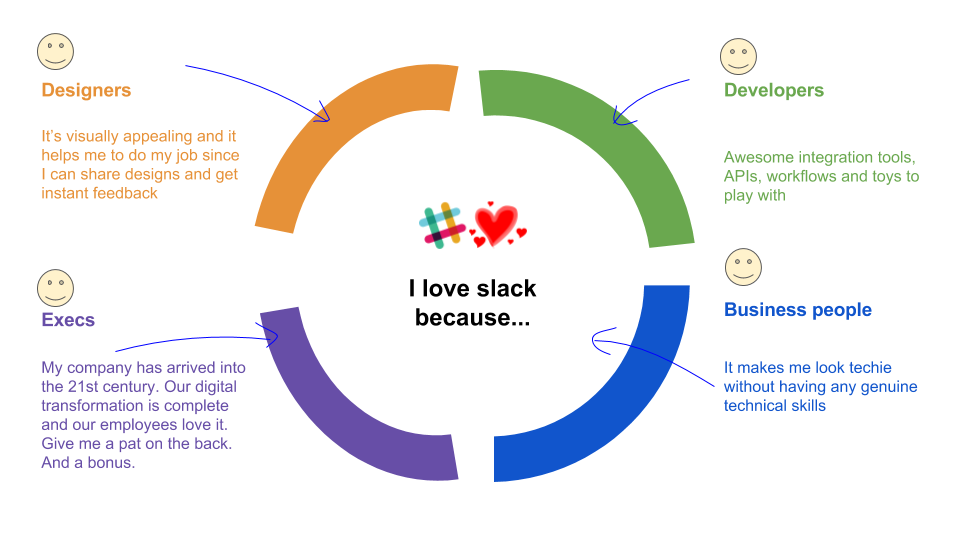 To be working at a company which uses Slack says a lot about you as an employee but it also says a lot about the company you’re working for. It’s one of the few products which developers, designers, business people and company execs all want to use – with varying reasons:

Bashing out a 5 bullet pointed next step post on Slack after a meeting makes you feel weirdly productive. Adding bold and italics to your text only serves to make you feel even more productive. It feels like you’re so busy. All of the time. You simply don’t feel as productive – or important – when you’re writing an email.

Using Slack makes you feel like you’re playing the only video game that’s ever been officially permitted to be played in the office 24/7. You feel so happy when you’re playing it.

Because you’re addicted to it.

Slack is the embodiment of the Hook model. If you’re not familiar with the Hook model. It goes a little something like this. Digital products can be purposely designed to make you literally (and I mean literally in the literal sense; not in the non-literal sense it’s mostly used for now) addicted to them. There are 4 parts to this – outlined below: 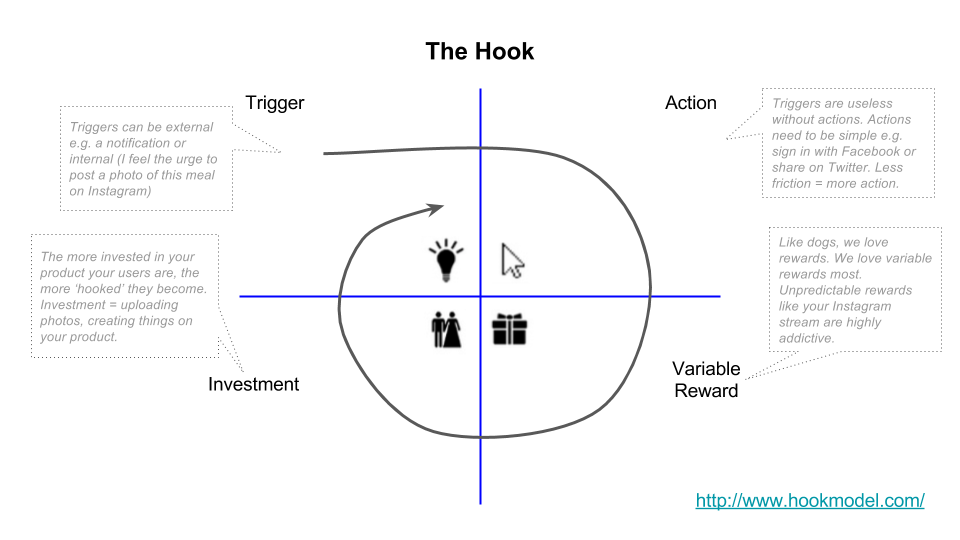 Applying the Hook model to Slack you can clearly see how its users are filthy addicts:

The case against Slack

1. It’s not that original

Typing a message to someone else has been around for a long time. Angela Lansbury did it for many years in Murder She Wrote. Slack’s core value proposition – typing words to humans – really isn’t innovative. At all.

Based on no data other than my own experience, 90% of Slack users use it to type a message to someone else. Making it nothing more than MSN messenger with custom emojis.

For something as simple as a chat tool, Slack is surprisingly complicated on first usage. It prompts you to use a ‘magic link’ rather than typing in a password, you’re forced to join channels without really knowing WTF you’re doing. The learning curve is steep. But, once you get to grips with it you do eventually understand what’s going on.

If Slack is to transition from workplace tool to ubiquitous communication tool though, the onboarding and terminology needs to be made simpler.

Remember the days when you would just send an email to a colleague and wait for a response? Those days are over once Slack arrives. Instead, you’re faced with an onslaught of relentless distraction.

In his recent book, Deep Work, Cal Newport describes an exhausted workforce utterly distracted and physically unable to spend more than a few seconds on one task before being distracted and switching to a new one. The result of this distraction is that we work in a perpetual state of shallowness; hovering around like flies, flitting between easier tasks, rather than setting aside an hour or so to get deep into 1 item.

The future of Slack

So where does Slack go from here? Here are a few possible, imaginary scenarios:

1. Implode in the face of copycat-competition

Replace company X with Snapchat, and you have a pretty good account of what Facebook is doing today with Instagram. Instagram stories, the unashamed copycat of Snapchat has worked wonders for Instagram. Instagram’s daily active users have skyrocketed as result. Whilst the game isn’t yet over for Snapchat, Facebook’s aggressive copycat strategy appears to have stalled user growth, at least temporarily.

A similar scenario could play out for Slack. With Facebook busy at work on WorkPlace, don’t be surprised if you start to see an all too familiar set of tools gradually baked into WorkPlace as Facebook seeks to capitalise on its 2bn+ userbase to destroy Slack.

The principal difference vs. Snapchat here is that Facebook users will be naturally reluctant to use their Facebook accounts for work purposes. Using Facebook for work-related communication feels wrong. Facebook has reportedly planned to address this by forcing all users to create separate Workplace accounts. This seems like a smart strategy to overcome the issues around privacy, but the uncomfortable feeling that you’re using Facebook for work related communication is likely to persist.

Either way, Facebook is coming for Slack. And it’ll be fascinating to see how it pans out.

2. Lose in a paradigm shift

Typing with our fingers will become outdated at some point. As we move beyond mobile into the AR / VR era, communication itself will be redefined. Slack channels and emojis could become an outdated mode of communicating within a few years and Slack could lose its prominence as quickly as it has enjoyed its rise, unless it adapts to the paradigm shift on the horizon. 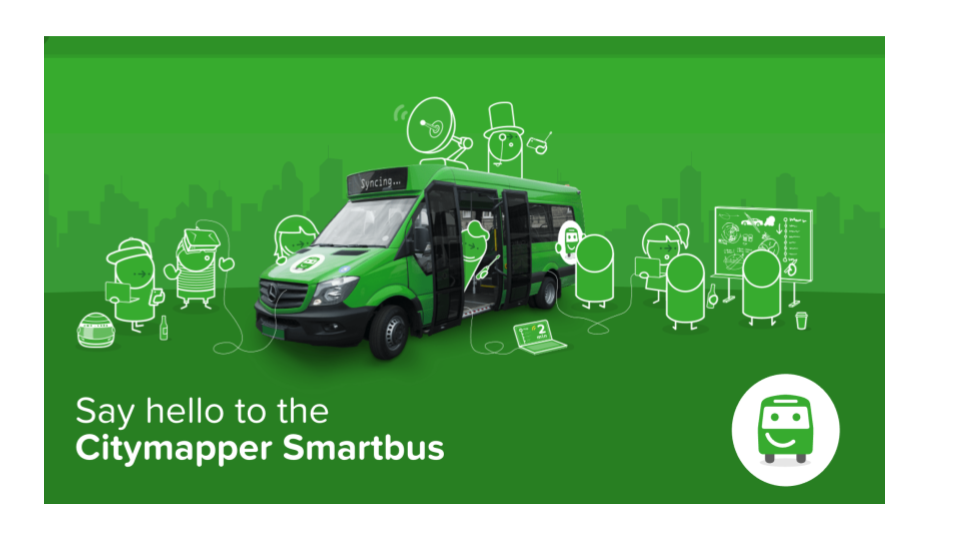 Slack lacks the distributional advantages that Google, Facebook, Microsoft all enjoy. Instead, Slack could seek to strengthen its market position by launching products in analogous verticals.

Such moves are typically underpinned or influenced by the core value proposition of the business. For example:

An acquisition is a likely scenario. In this scenario, it’s the aftermath of the acquisition that matters most. A Microsoft / Skype acquisition would kickstart the death spiral of Slack as Microsoft has repeatedly proven itself incapable in the mobile world. Its latest hideous incarnation of Skype only serves to reinforce this.

An acquisition by a company with more of a clue, however, might not be all too bad a thing. Amazon has been touted as a potential buyer, which would not be as ridiculous as it sounds at first. Imagine a connected Alexa-type Slack device in the workplace, bundled in as part of AWS. It could be fun.

Could Slack seriously dethrone Facebook as the de facto way to communicate with other human beings?

Imagine if the delight that developers, designers and business folks currently feel when they use Slack at work could be transferred to the wider population. Slacking your mother may feel (and sound) weird, but you probably don’t think twice about sending her a Facebook message. Facebook started life is an elitist university campus-only tool and expanded from its solid, dedicated user base to include the rest of the hoi polloi.

A quick glance at Slack’s public idea Trello boards will give you an insight into some of the potential uses for Slack as a communication platform. Ideas include using Slack as a Live Chat tool for customer support, scheduling meetings from within Slack and running and analysing employee satisfaction surveys.

Developers are the key

Its advantage could, however, become the reason it succeeds or fails. Developers are a fickle bunch; if Slack gets acquired by a corporate that hasn’t got a clue, fails to maintain its dominant innovation in its platform or focuses too heavily on growth, turning it into Skype for Business or some other hideous corporate tool, Slack risks alienating the community of evangelists who got brought them the success they have achieved so far.

They also have to prove they can make a bit of money. But we’ll leave that for another day.