This is what we’re building vs. here’s what we’ve built

When you try to explain to someone who doesn’t work in tech what exactly product management means, you’ll typically get lumped into 2 categories: project manager or product marketing. Neither of those is correct, but as a product manager you will find yourself grappling with both at some point.

The difference between product management and product marketing

In simple terms, product management is concerned with deciding what to build, for who and why. Product marketing is concerned with figuring out the most effective ways of telling potential customers about what’s been built.

There is of course, quite a bit of overlap between the two, since they’re both disciplines concerned with understanding what users find valuable, but they remain two, distinct roles nonetheless.

Why it’s helpful for product managers to understand marketing

You don’t need to be an expert in marketing but it helps to understand some of the fundamental principles of marketing.

Thinking like a marketer helps wire your brain to consider your value proposition from a customer’s point of view. Amazon’s one page PRD is written as a press release for a reason: it helps orient your thinking from a customer’s perspective, shifting away from the internal implications of the new feature or initiative you’re suggesting.

So if you’re brand new to product with no prior marketing experience, what exactly do you need to know about marketing as a product manager? Let’s explore some of the concepts we think are essential.

The marketing tech (martech) landscape is vast. And by the time you’ve understood what each of the new market entrants do, the market will have evolved so much that whatever you just learned may now be out of date.

So rather than trying to keep up with all of the latest martech tools and new entrants, it’s better to understand fundamental aspects of the marketing landscape including spending patterns and platforms. 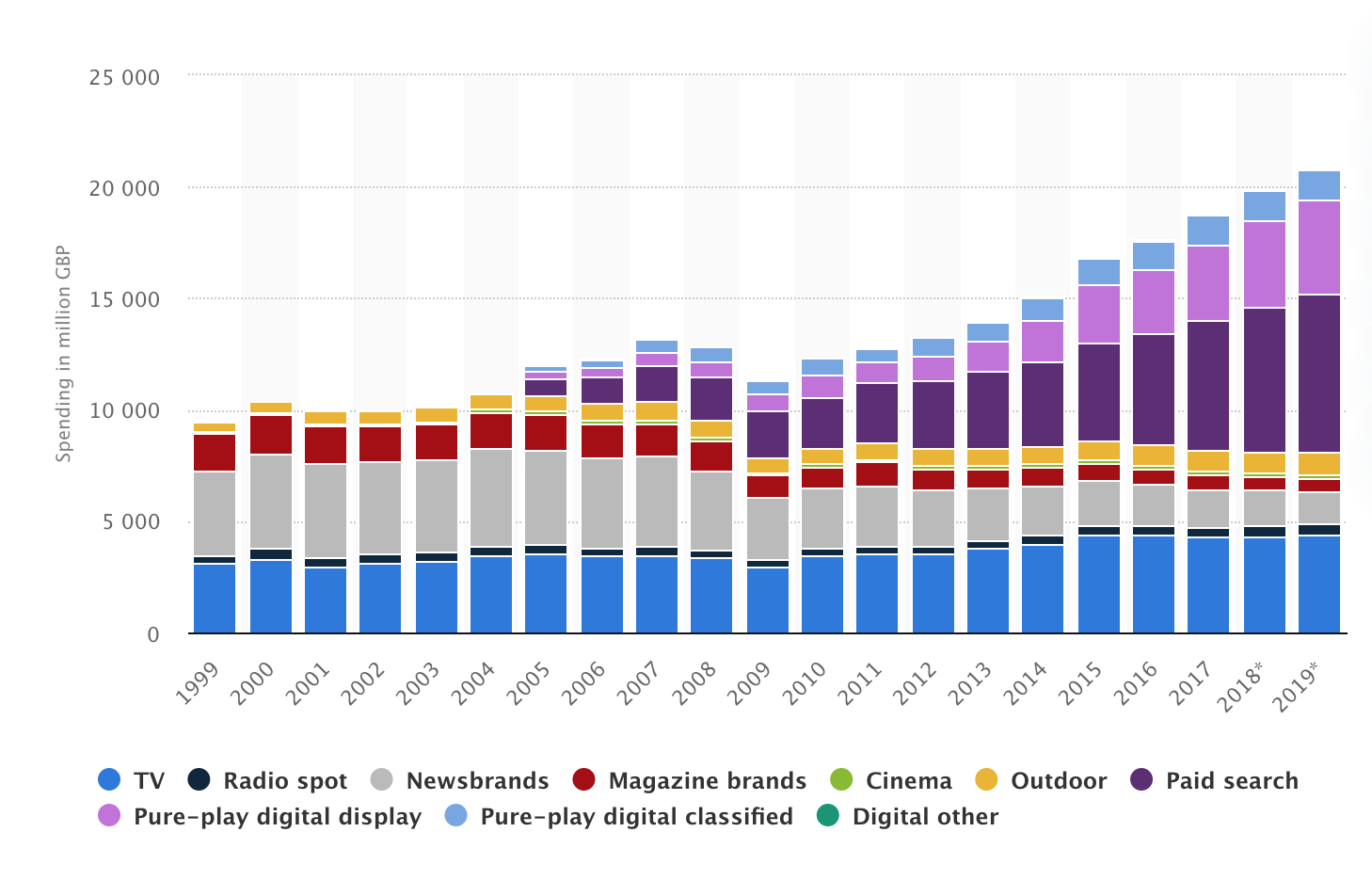 This gives you a flavour of how the advertising market has evolved over the last 20 years (UK data set):

Some things worth noting:

The speed at which the internet disrupted the incumbent channels was also record breaking:

With advertising spend as a helpful bit of context, let’s delve a bit deeper into some important marketing / advertising principles that are useful to know as a product manager. 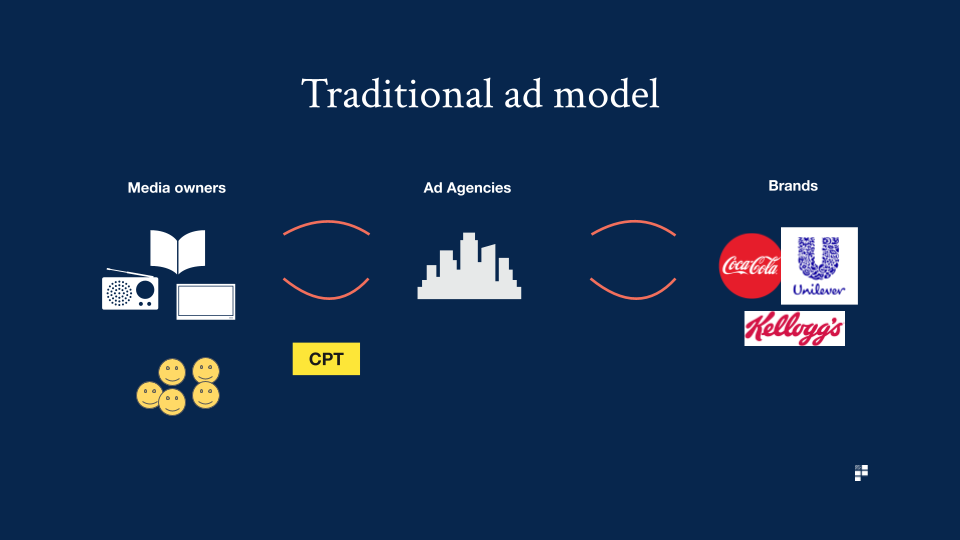 Up until around 2010 when paid search and ‘self serve’ ad models emerged, the traditional ad model for most larger brands was the ad agency model.

In the ad agency model, a client hires an agency to represent their interests and decide which channels should be included in their marketing plan and how much budget should be allocated to each channel accordingly.

This process is known as media planning.

Media planners from an ad agency put together plans on behalf of a client and once the plan is agreed by the client, media buyers then purchase advertising space from media owners, often at previously negotiated rates.

Rates are typically negotiated at either an agency or individual client level, and advertisers are charged at a cost per thousand rate e.g. for every 1,000 customers you reach, you’ll be charged $5.

A plan would be created by the agency and all parties would agree to the advertising campaign. Creative agencies would get involved typically after a media campaign is planned and booked to decide what the advertisements should actually say or communicate.

This is the traditional ad agency model and still represents the way advertising is planned and bought for channels including radio, TV and press.

It’s rare for digital products to touch these channels until they’ve reached maturity or have significant budgets since it can be prohibitively expensive to run a TV campaign on major networks.

However, if budgets are available, since traditional media like TV, radio and press are increasingly viewed as ‘legacy’ platforms, there are potential gaps to differentiate your product by advertising on these channels.

Google Chrome became the first major browser to dip its toe into traditional ad spending in what was seen as an innovative move at the time since browsers historically never did ‘above the line’ advertising. 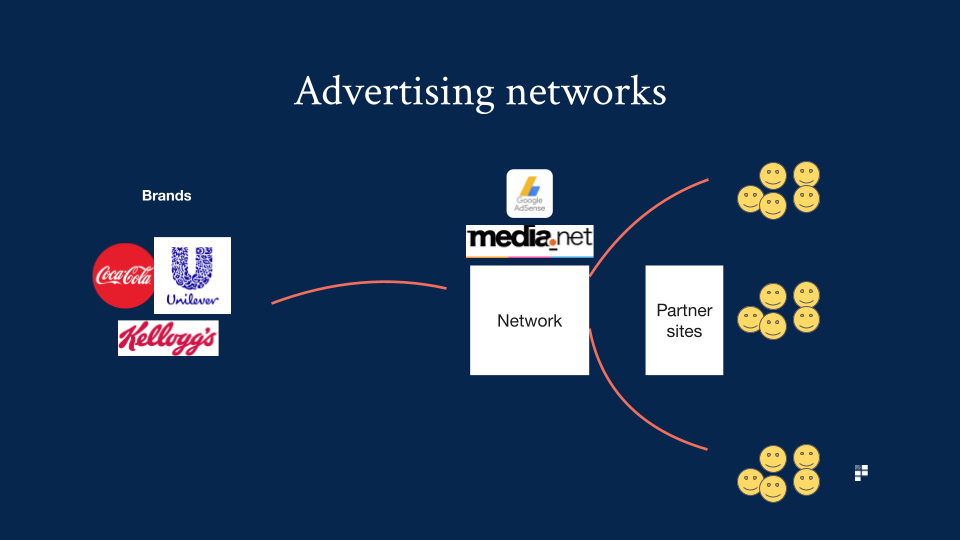 Ad networks are groups of smaller partner websites bundled together whose inventory can then be sold to larger advertisers as part of an overall marketing campaign.

Ad networks can be super helpful for advertisers to target niche audiences that might otherwise be difficult to reach.

The inventory that ad networks have is typically comprised of display ad placements – digital banners and billboards that often get very poor CTRs but drive brand awareness.

Influencer marketing is still a relatively new concept. As social media users amassed massive followings, capitalism kicked in and advertisers spotted a lucrative opportunity to target the followers of these social media users.

Now, influencer marketing is estimated to have grown into a $13.8 billion market, with more headway for growth in the coming years. 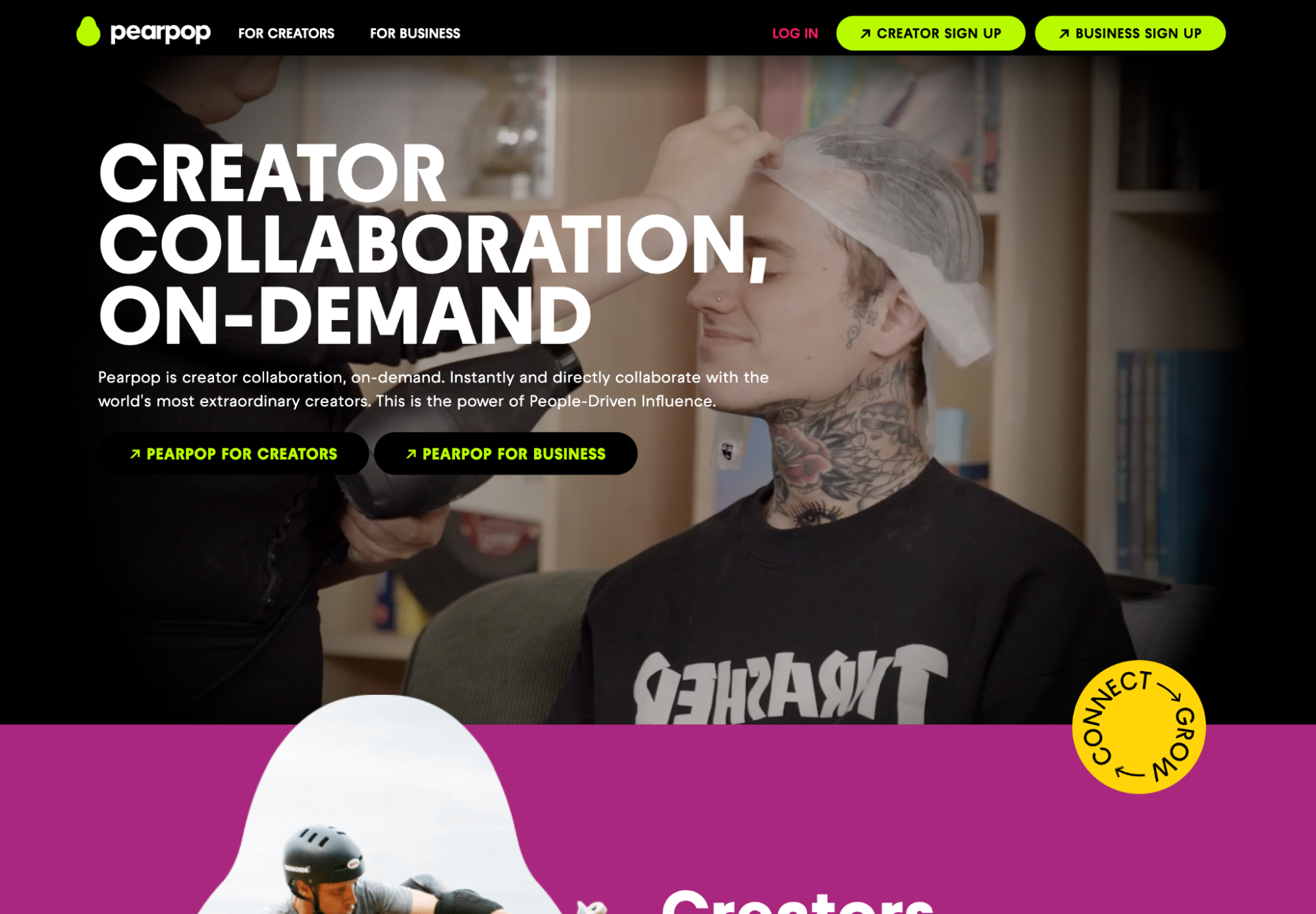 Pearpop is a social media agency founded in 2020. Based in LA, the agency allows brands to hire A-list social media content creators and influencers including Heidi Klum, Loren Gray, Snoop Dogg and others.

Brands can work with the agency to hire specific content influencers who will then create content for brands. They can even create ‘challenges’ (remember the ice bucket challenge?) and pay for multiple influencers to perform the challenge in an attempt to help both the challenge (and the brand) go viral.

Similarly, Cameo allows brands to partner with celebs and influencers to promote products, services or shout outs. Sure, Cameo is probably known more for its C-list celebs and reality TV stars these days, but the platform still has clout, with hundreds of millions raised in funding to date.

As a product manager, influencer and content marketing still seems like an under-exploited space to market digital products.

Crypto and Web3 on the other hand, have flooded the influencer space with paid promotions for their latest coins. During the Doge rise, accounts like SlumdogeMillionaire were tapped up to promote the latest crypto coin or pump and dump scheme.

Non-web3 products, on the other hand, rarely seem to make use of influencer marketing, aside from the occasional product review on major tech channels like MKBHD.

Clearly, product marketers making use of these channels always need to do their due diligence before collaborating with influencers but I can definitely see a world where SaaS businesses hire influencers from micro-niches to promote their products and explain how useful they are to solving problems in that niche. That’s exactly what happened to micro SaaS business Leaveme alone.

LeaveMeAlone is a B2C newsletter subscription tool that allows consumers to manage all their email subscriptions in one place.

Here’s one of the co-founders talking about a recent spike in traffic. The founders had no idea this spike would happen; the traffic was driven entirely off the back of one TikTok post and was not formally ‘planned’ in a traditional sense.

It’s important to realise, though, that distribution and reach is one thing, but converting these users is quite another.

Sure, you can go viral on TikTok and get 2 million views of a video, but if this results in zero conversions, what’s the point?

As the channels available to product marketers evolves, so too do the tactics used for conversion. Against a new landscape of TikTok videos, influencer marketing and the newsletter-fication of content, there a now new ways not only to reach customers – but also to convert them.

Here’s a selection of some of the new tactics marketers are using that are worth knowing as a PM: 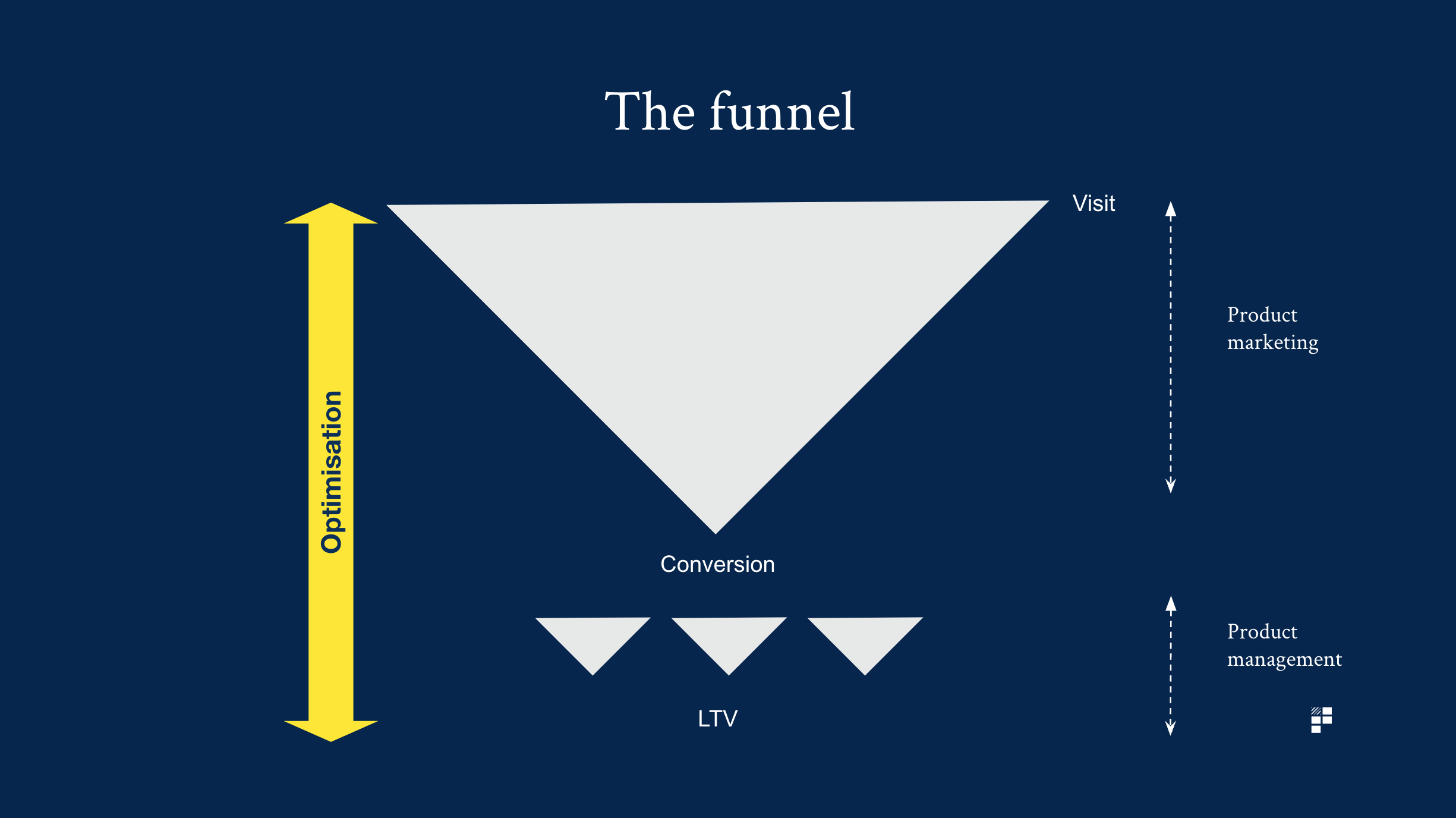 Product marketers have a solid grasp of ‘the funnel’. For complete newbies to the digital product space, a funnel is a simplified representation of how a customer experiences your product throughout their lifetime, most often with an emphasis on acquisition.

Rather than one giant funnel, it can often be better to consider multiple funnels, each with their own sequences depending on the goals of the user.

Not everyone is coming to your product’s website or channels with the same goals and so it makes sense to orient your funnels around users – and not just around business metrics.

Product marketers and product managers will often find themselves working closely together on the problem of acquisition vs. retention.

Typically, product marketers will be responsible for customer acquisition and product managers / product teams will take responsibility for retention since the product experience itself often dictates how likely a user is to keep using the product.

When you’re creating funnels, consider who is responsible for which part of the funnel. Sure, we’re all ultimately responsible for crafting an awesome product experience that delights and retains customers, but it’s important to know who is leading the efforts in driving funnel metrics.

Product marketers will consistently think in terms of audience segments. This is an important mindset to adopt as a product manager, too.

Typically, a marketer will start with a broad range of audiences and narrow them down depending on the results driven from each audience.

So, for example, let’s say you’re building a new SaaS product which allows dentists to manage their relationship with customers.

You might consider 3 target audiences, advertise to each of those with different ad campaigns in different geolocations:

Armed with the results of this initial broad campaign, you’d then be able to narrow this down further to focus on the audiences delivering the best results.

Traditional advertising is sold on a CPM impressions basis. CPM stands for cost per thousand where thousand is represented as an M for the Latin word for a thousand, ​​mille.

It’s mostly used for online display ads and is a price you pay for ‘reaching’ a thousand users. So, you may pay $10 for reaching every 1,000 users. This doesn’t mean clicks, though. The users don’t have to do anything. They just get served the ad and an impression is recorded. Ad fraud is a major problem for the industry and new technologies are emerging to attempt to tackle ad fraud.

Cost per click, usually adopted by search engine marketing, but also used for other display ad services as well. Reddit and LinkedIn offer a CPC model for their advertising businesses.

Here’s the average cost per click of Google Ads over time to give you an idea of how this fluctuates. It does also depend on the niche or keyword you’re targeting. 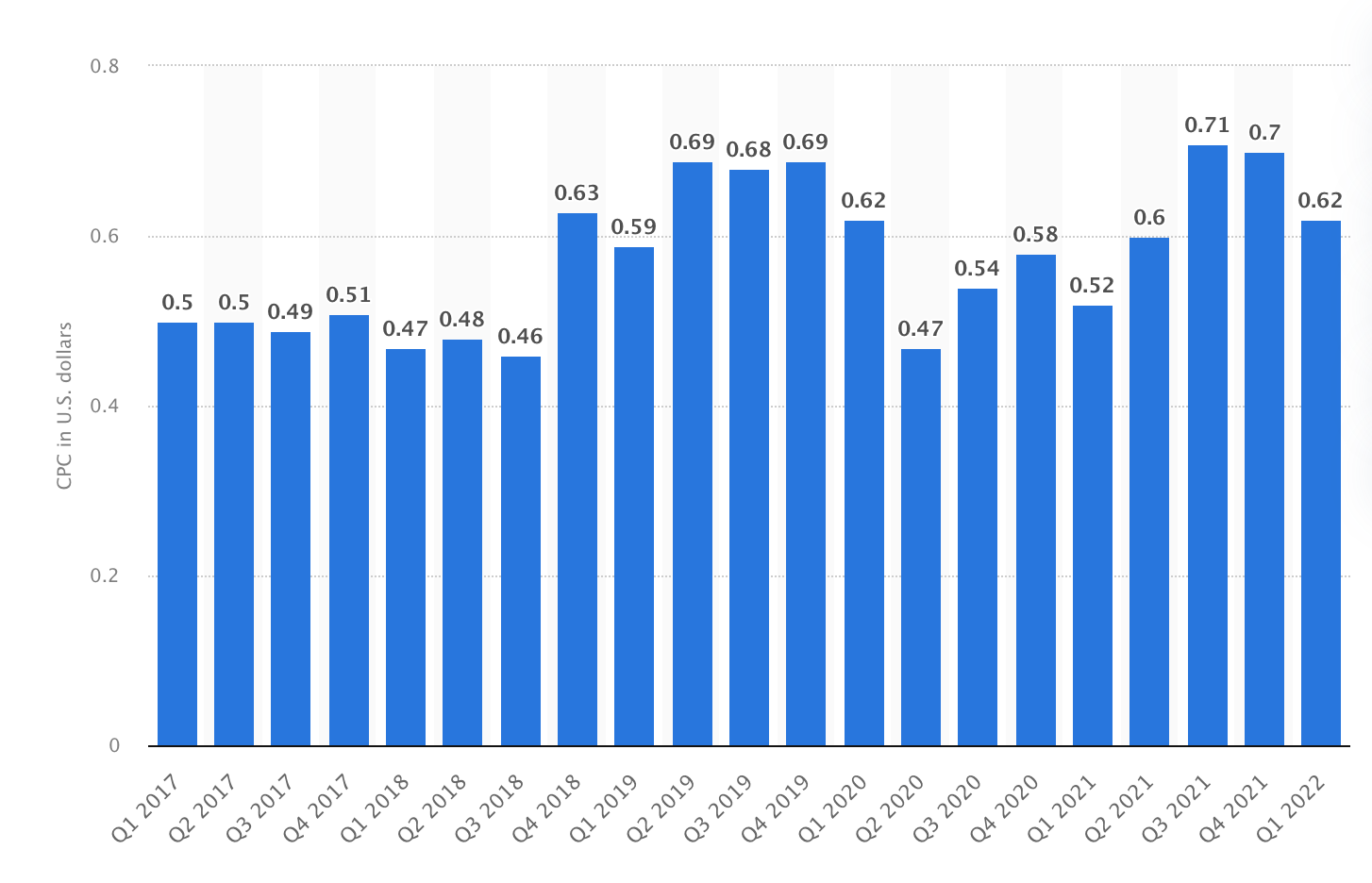 How much revenue do we get over the lifetime of a customer? A lifetime is typically measured up until a point where you can agree a customer has churned.

What’s the click through rate? CTRs are used in PPC campaigns, email marketing and display ads.