How to thrive in a constant state of negotiation

Product management can sometimes feel like a non-stop series of negotiations. And without direct line management responsibilities, much of a product manager’s ability to lead and influence is achieved through indirect methods.

A typical week in a product manager’s life could include a mix of negotiations with any – or all – of the following:

A recent study by McKinsey showed that the average % time spent across each of the following activities looks like this: 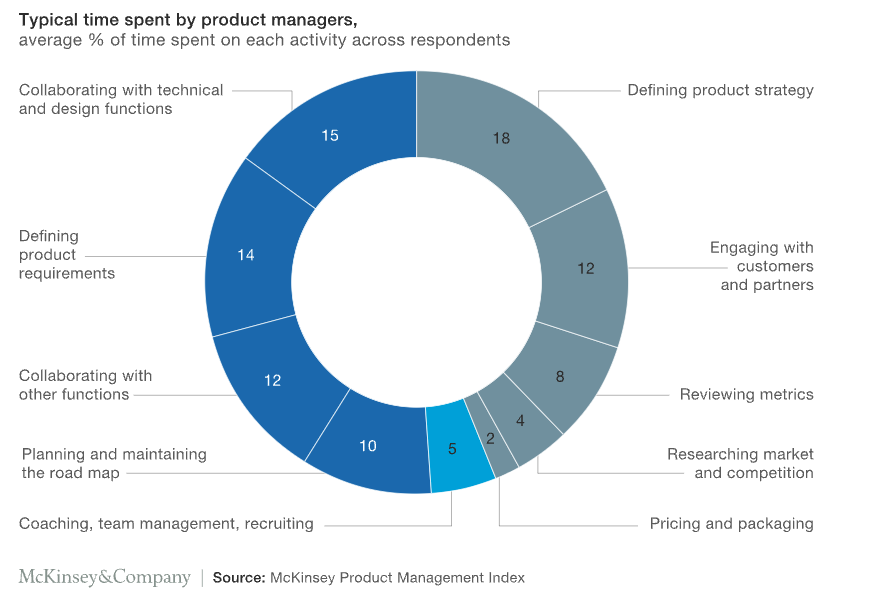 If we were to bundle up all of the activities that are likely to involve some form of negotiation, we’d end up with something like this: 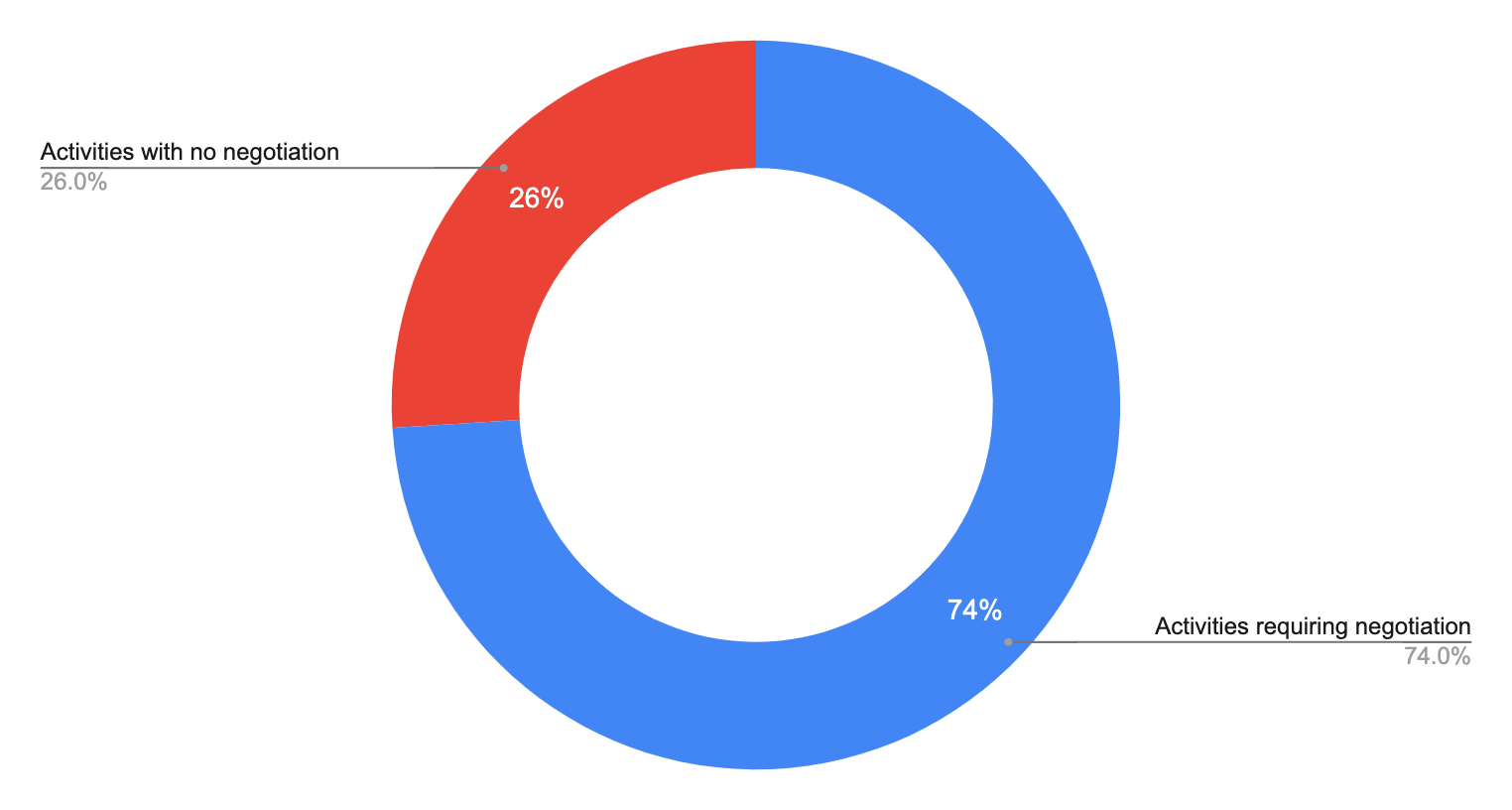 Clearly, then, negotiation is a fundamental part of a product manager’s life. So it’s probably worth spending a bit of time understanding the different types of negotiation and how you can excel as a negotiator in day to day product management.

The traditional approach to negotiation can be described as ‘positional negotiation’. This means, 2 negotiating parties take 2, often opposing, positions and the goal of the negotiation is to meet in the middle somewhere.

In a positional bargaining approach, it’s often the ‘hardest’ who win; those who dig into their position, refuse to budge and apply pressure will beat those who yield to pressure, change position easily or accept one-sided losses to reach an agreement.

This is bad news for soft negotiators but thankfully there is an alternative way to negotiate using something called principled negotiation instead.

The 4 facets of principled negotiation

This methodology was created by a group known as the Harvard Negotiation Project whose primary focus was to gain a deeper understanding into the nature of negotiation practices.

According to the study, there are 4 facets which make up principled negotiation:

When tackling a negotiation, it’s likely that you’ll lean on each of these 4 different facets in order to achieve a result which solves the problem you’re tackling.

Let’s explore each of these different facets and – crucially – understand how they impact you and your day to day role in product management.

Often when you’re negotiating, people and problems become entangled. People often become attached to their own problems and sometimes see the problem they’re tackling as an extension of their own personality.

Entangling people with problems happens all the time in product development, and the first step to a successful principled negotiation is to separate the two.

How to separate people from problems in product development

The tricky part here though, is that as much as you’d love to completely disentangle people from problems, wherever there are people involved, there are also specific interests at play.

Understanding the fundamental interests at play in a negotiation is critical. When we’re negotiating we all have different interests; if we didn’t, we’d just agree to everything all the time and negotiations wouldn’t exist.

In product management, understanding different perspectives and different interests is essential for achieving a successful outcome in a negotiation. And a successful outcome doesn’t mean an outcome you want; it may be that after the process of negotiation, you actually realise that your starting position wasn’t correct and that you might need to change direction to best tackle a problem or achieve a goal.

Let’s take a look at a simple, non-product example first.

The most powerful human interests

When you’re negotiating with another party and you’re trying to identify their interests, it’s likely to be a manifestation of one of the most powerful human interests.

Once you’re aware that these are typically the most common interests that humans have, you’ll be able to better navigate complex negotiations with stakeholders and other third parties – because you’ll be able to identify instances of each of these interests whenever they arise.

Let’s take a look at some examples of how some of these might arise in a product context.

If you’re struggling to identify what the interests of the other person might be, ask why they believe in or want something. And ask them why they disagree with your perspective as well. This will often uncover the true nature of the interests at play.

And the role of a PM during this negotiation process is to help the other side feel as though you understand their interests and would like to come to a mutually beneficial understanding. Simply reiterating the other person’s interests back to them goes a long way in building this rapport.

The third step in a successful principle-based negotiation – and for PMs generally when negotiating – is to generate some options. If you’re stuck at an impasse with no obvious route out of a problem, generating options – no matter how absurd they seem – can help you to get moving again.

How to effectively generate options as part of a negotiation

When humans are involved in negotiating with each other, it’s almost inevitable that psychology and human emotion influence the direction of the negotiation. One way to combat this, is to ensure that your negotiation defers to using objective criteria wherever possible.

For example, let’s say you’re negotiating with a vendor who is providing you with a third party API used to power a specific part of your product. They say they’ll charge you X amount per API call but you don’t think it’s a fair amount.

In another example, let’s say stakeholders are adamant that you desperately need a mobile app. The objective criteria to use in this context would be the latest data from your analytics tools which shows that only a tiny fraction of your users are visiting your website or using your product on a mobile device.

Types of objective criteria to use in negotiations

Each of these are examples of the types of criteria you can use to aid your negotiation – especially when you’re stuck and need guidance from data.

Bringing it together – an end to end example

OK, so we’ve touched upon a couple of examples throughout but let’s now explore an end to end example which brings together all of the concepts we’ve mentioned so that the next time you find yourself in a negotiation, you’re well equipped to deal with it and achieve a successful outcome.

Let’s imagine you’re a PM at a new startup and the head of marketing says you desperately need a CRM. It’s early days and implementing a CRM would take up engineering resource away from building other things which could prove product market fit.

Here’s some ideas on how you could approach this situation using principled negotiation tactics.

First up, separate the problem from the people. This isn’t X person’s request to build a CRM, it’s likely to be a symptom of a separate problem that you need to explore further.

What human interests are at play?

These are just made up examples, of course. A PM’s role is to have meaningful conversations to uncover some of the true reasoning behind feature requests like this. And it’s important to identify shared and divergent interests, too.

What shared and divergent interests do you both have?

Shared interests in this context include a mutual desire to grow the company and achieve sales and marketing metrics.

Divergent interests in this example would be the PMs desire to focus product / engineering effort on other prioritised roadmap items vs. the sales / marketing’s interest to invest heavily in integrating with a third party CRM.

Once interests are identified, there may be options you can co-create which help guide the negotiation. In this example, options could include:

Finally, you’re working through a negotiation like this, data can work in everyone’s favour.

If the request is to integrate with and choose a CRM, objective criteria can be used to influence the negotiation.

In this example, data points could include:

Working in product management can sometimes feel like you’re in a constant state of negotiation. And to some extent, that’s true. So with so much of our time spent negotiation, it’s probably worth equipping yourself with some tools on how to succeed in negotiation – even if that doesn’t always mean getting what you want.