Pull requests, merges, branching and all that jazz 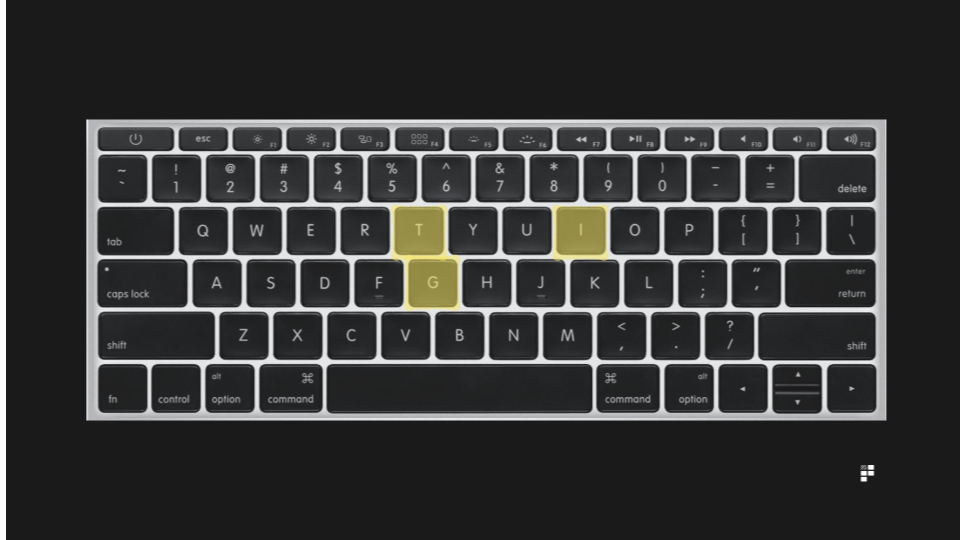 In the UK, ‘git’ is a derogatory word, often used to describe a ‘stupid, despicable person’. It’s a word that Roald Dahl might use to describe that chef who bakes Bruce Bogtrotter’s cake in Matilda; not quite someone as monstrous as Mrs. Trunchbull but hideous nonetheless.

Git is also a command line tool, used by developers, to push, pull and modify code in a location known as a repository. More on that later.

If you’re a product manager, unless you’re from a computer science / technical background (many are, many are not), you might be confused about some of the terminology that gets used by your engineers on a daily basis, particularly when it comes to GitHub. 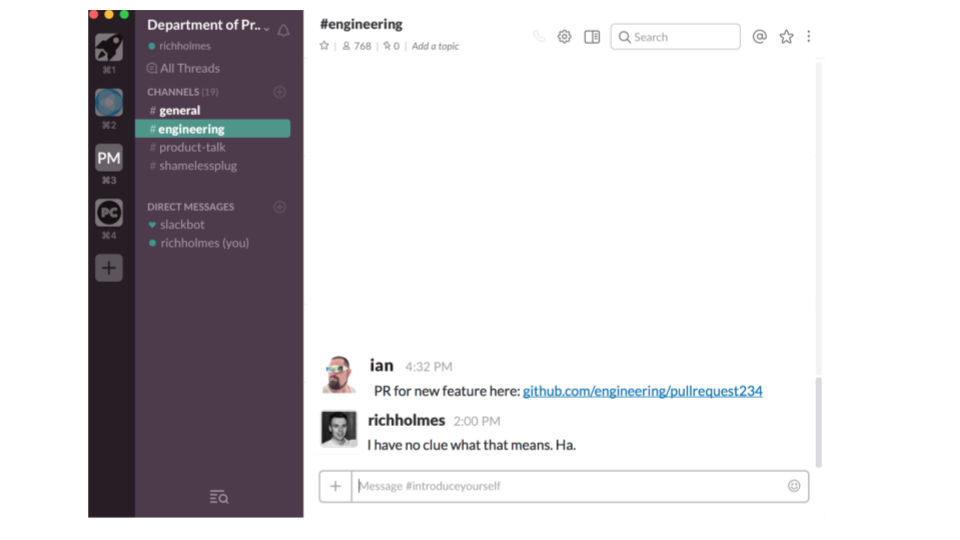 A pull request is created by an engineer and sent around the group for review. If you’re not familiar with github and how it works, you sit silently, ignoring the pull request and hope it will make sense one day. But not today. So long as the work gets done, who cares about things like GitHub, right?

What exactly is GitHub?

‘Facebook for geeks. Instead of uploading videos of your cat, you upload software.” – Wired Magazine

There are two important parts of this definition:

Firstly, GitHub acts like a social network in many respects, and secondly it allows users to upload software. It’s primary function is to allow developers to upload and maintain software but let’s examine the social aspect briefly.

GitHub as a social network 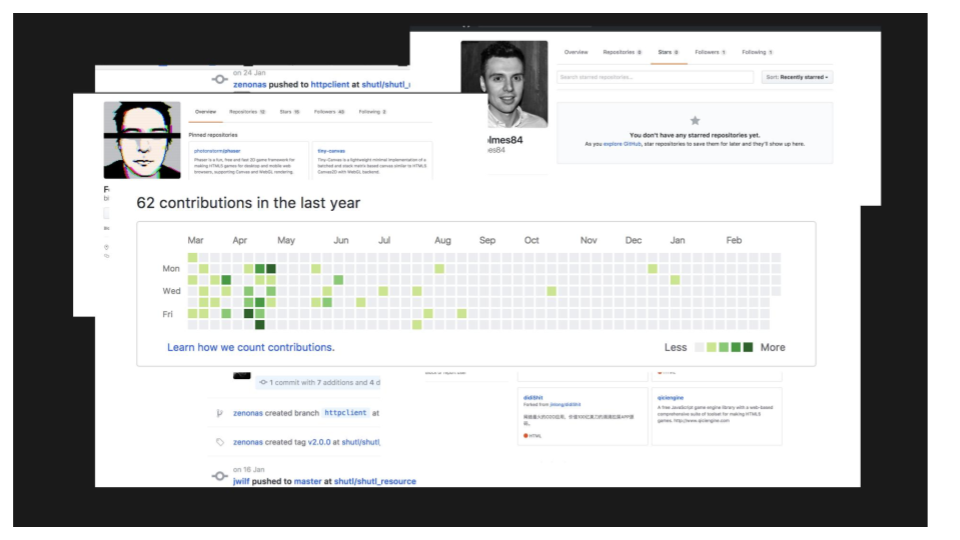 Millions of engineers around the world are on GitHub. GitHub is a social place; engineers communicate with each other, work together on open source projects and add value to the network by producing more content (in this case code). There are endless open source projects on GitHub which engineers will be actively involved in. You want to work on a browser based version of Tetris? Go for it.

Engineers are encouraged to help each other out in the community and it’s all for free (unless you’re working on business related projects in which case you pay for a premium account). The ambition of GitHub is to create an open, collaborative environment where the world’s repositories (buckets of code) live, breathe and evolve over time.

Here’s some of the social functions of GitHub:

The main function of GitHub is storing repositories of code. If your organisation uses GitHub, your product’s code will be stored on GitHub.

You probably know this already but if you don’t, think of a repository as a bucket where your product’s code is stored. It’s also sometimes referred to as a repo.

How GitHub fits into the overall software development workflow

GitHub is where the code is stored during your sprints and before a deployment happens. Your engineers will be interacting with GitHub several times throughout the week or day as they work on building your product.

Let’s say you have a new engineer on the team. Here’s an example of how they would get started using GitHub and how it fits into the overall software development workflow.

The benefits of using git and GitHub 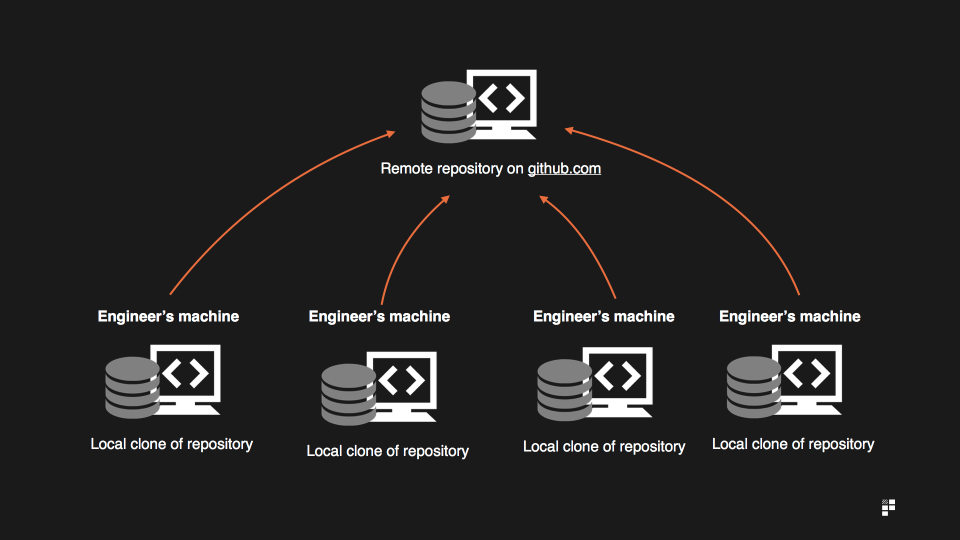 The main benefit of using Git and GitHub is that they facilitate easily manageable version controlling. If something goes wrong with your product, the code changes can be easily reverted back to a previous version. That’s version control. Git and GitHub also allows your engineers to work on different branches of code and then create pull requests to merge the code back together again.

Notice how I said ‘git and GitHub’. Yes, they are 2 separate things.

The difference between git and GitHub

Git is a command line tool which allows developers to create branches of code and manage versions of their code. The command line is that terrifying tool that engineers use to do things you wish you could.

GitHub is the website or service that hosts the repository and helps manage version control through a useful interface. You don’t have to use GitHub to store repositories and there are plenty of alternatives to GitHub available, such as BitBucket.

Git was chosen as a word because it’s easy to type into a keyboard. Your engineering teams will be typing the word git into their command line tool a few times a day.

Each different command performs a different function. For example, when an engineer is finished with a piece of work, they may type:

If you’re wondering WTF does that mean? That’s great.

Let’s take a look at some of the most important – and confusing – terms you that are useful to know as a product manager or indeed as a non-technical business person who is interested in learning more.

The most important terms to know as a product manager 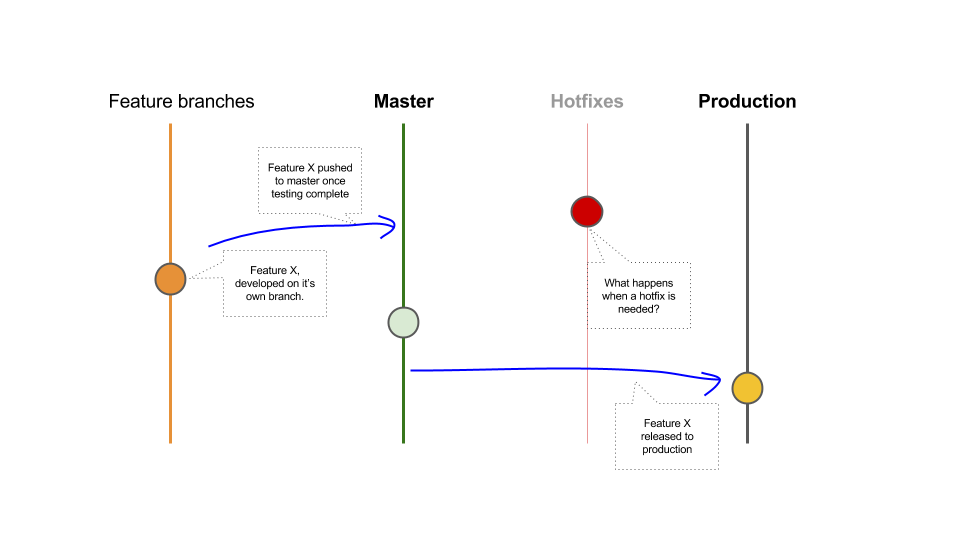 Think of your main codebase a bit like a tree trunk. Now, think of a new feature that was recently launched. This acts like a temporary branch on the tree.

If your team is set up to use feature branches, it’s likely that your team used a branch to build that feature, which is to say that the feature was worked on independently of the main code base – the tree trunk.

When working with git, branches are used to allow developers to work on individual features, without impacting anyone else who may be working on other features.

This allows developers to work in parallel on multiple features and it makes things cleaner from a development perspective. Having a well defined branching strategy can mean it’s easier for your engineering teams to debug problems and help to smooth your release process.

A branching set up might include some variant of the following:

In git, the command for creating a new branch is this: 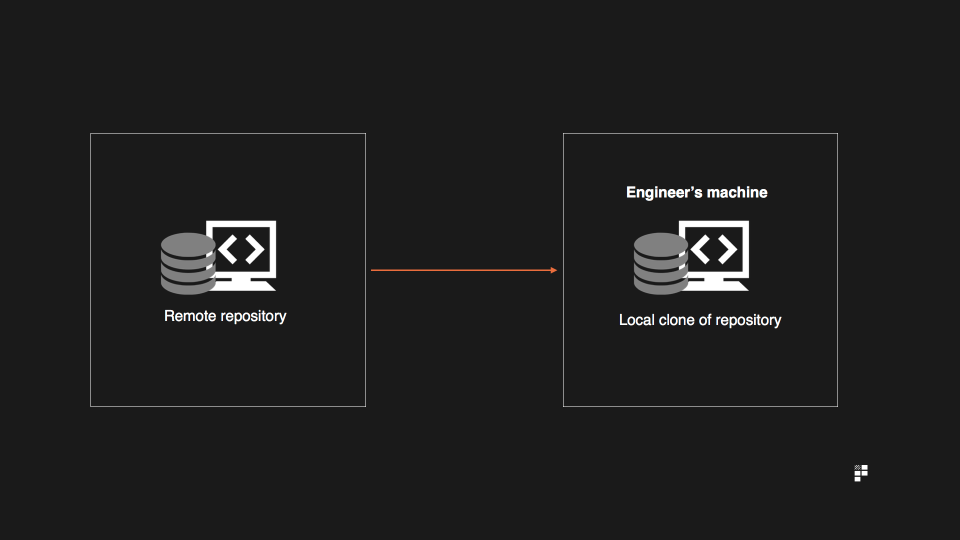 Every engineer who works with git and GitHub will have a copy of the repository stored on their local machine. This process is known as cloning. GitHub provides you with a link to the location of your remote repository and this is included in the git command used to clone the repository.

Here’s an example of the link that GitHub provides to describe the location of your repo:

Bringing it all together – an end to end example

Let’s pretend you’re an engineer, and your idiotic product manager wants you to stop playing ping pong and work on something of value to the business. Appalling, I know, but you grit your teeth and begrudgingly agree to do it.

You’ve had sprint planning, you’ve sized the work as a 1 or 2 and so you’re comfortable with starting the work.

You’re required to change the color of a button from red to blue. Hardly taxing, but always good to factor in a buffer when sizing.

What happens next? Here’s a breakdown of what might happen. Note, these steps will be different for your product but should act as a guide:

If you’re a new engineer on the team, you might not have access to the codebase. If you don’t, you’ll need to clone the repo; that is, make a local copy of the repository on your machine which is cloned from the remote copy of the repo.

With a local copy of the repo cloned to my machine, you’re ready to go.

Since this is a fairly straight forward front end task, you’ll make the necessary changes. Changing button colors involves a few bits of CSS changes. Your CSS specifies the color blue at the moment, but your product manager wants to change it to red.

That’s your job done. In a few moments, you’ll be done, but you need to sort out a few bits first.

git commit -a -m “Color changed from red to blue"

This has now committed the changes in your local repo.

The changes you’ve made are only made on your local machine, which means you need to push them. Using git push, you push your branch back to the origin repo:

Before anything can be merged, you need to create a pull request – a request to pull your feature branch back into the master branch.

After you’ve pushed your code to the origin, you create a request to pull it back into master. This triggers a code review.

The code changes you’ve created are reviewed by your fellow engineers to ensure your code meets the standards set by the team.

Since this is only a small change (changing the color of a button), it’s likely that the code review process won’t take too long.

With the code reviewed, you’ll either get a thumbs up or a thumbs down from the team. If there’s something wrong with your code you’ll need to make some changes and push the new changes, if all is good, you’ll be able to merge your code.

You passed the code review. Congrats.

The last step is merging the feature branch back into the master branch. Before you do that, it’s a good idea to make sure your local and remote repos are in sync. To do this, you pull the latest version to your local machine:

Then you can do your merge using something like this:

With the branches merged, the feature branch can be deleted since the code is now merged in the master branch and is no longer needed.

With your code changed and the button updated, you may have additional sets of tests which run. For example, you may use a tool like jenkins which works as a continuous integration server which basically means it alerts the team to anyone who has added something into the code base that it doesn’t like (because it breaks tests or is hideous).

With your build tests passing, the code is ready to be deployed and your button will be changed in the next release.

If you’re lucky enough to have continuous deployments, that could mean a matter of minutes. If you’re not, it’ll be included in your next sprint.

What you need to know as a product manager

Git and GitHub is by no means an essential skill to have as a product manager. You will never need to use it in your day to day role, so having a deep understanding of git beyond what we’ve covered is a nice to have as opposed to a must-have.

From a product management perspective, it’s useful to consider a few things in regards to git and GitHub:

So that’s it. Hopefully that’s cleared up some of the questions you have around pull requests, merges, branching and all that other nonsense. Now get back to work, you lazy git.