The Department of Product

Project management that works for the whole team

Netflix shares soared this week as the company reported better than expected earnings. 2.41 million paying subscribers were added to the streaming giant’s membership, with the Asia-Pacific region accounting for the majority of that with 1.43 million subscribers. The positive earnings comes as the company begins planning the rollout of its ad-funded model that will cost $6.99 and launch in November. As part of the rollout, it was recently announced that Nielson ratings support will be added some time in 2023.

For anyone attempting to keep up with the latest social media apps, you’ll know that BeReal is the hot app that’s topping the charts everywhere, right? Unfortunately, not. Now, there’s a new kid on the block with the rise of an app called Gas. Launched by the founder of tbh (acquired by Meta), the app works by encouraging teens to say positive things anonymously about each other. According to the founder, the app has been adding 20,000 new users an hour as it shot straight to the top of the app charts. The launch hasn’t been without controversy though, as the founder alleged that an elaborate hoax designed to dissuade users from installing the app was underway.

But as Gas explodes, one social network appears to be imploding. According to reports, Meta’s VR Horizon Worlds is struggling to find product market fit. In stark contrast to the company’s social media apps which attract more than 3.5 billion monthly users, according to the Wall Street Journal, Horizons is attracting less than 200,000. Internal statistics reportedly show that only 9% of worlds built by creators are ever visited by at least 50 people.

Not to be outshone by Meta and Google’s keynote events last week, Microsoft made a bunch of new product announcements of its own. Highlights worth noting for product teams include the revelation that Github’s copilot feature is already writing 40% of code for the developers who use it, plus the announcement of a new product called Designer which has been dubbed the “Canvas of Office”. Whoever came up with that name though, will soon stand to be corrected, since the giant also announced that users will need to wave goodbye to the Office brand and instead get used to its new name: Microsoft 365.

Finally, if you’re looking for a filterable collection of high converting landing pages from top product companies you can use for inspiration, this collection and guide might help.

Enjoy the rest of your week!

Google is hoping to expand its stake in the software industry with the launch of  KataOS, a new OS for machine learning tools. Described in a company blog post as, “a provably secure platform that’s optimized for embedded devices that run ML applications”, KataOS will run alongside its reference implementation, Sparrow. (Google product blog)

Tools – A new app for managing projects for product teams

Centralize where decisions get made with Height — a project management tool so flexible that everyone, from product to engineering to design, can all track their work in the same place. Get your own workspace for free. (Sponsored)

UX – How to understand user pathways in Analytics tools

What type of information does analytics provide? Analytics can reveal the most common pathways between pages — in other words, it can show us where most people start in our product or app and the pages or screens (or even features) they interact with next. These pathways are usually visualized in a Sankey diagram. (NN Group)

Microservices have helped the backend world to divide backends into smaller, more manageable, and more efficient pieces. Micro frontends are the same concept brought to the frontend world, and it is helping development teams to architect and orchestrate their companies’ digital transformations in a more flexible, efficient, and fun way. (Hackernoon)

For the first decade or so of its existence, the podcast industry was built on a largely open ecosystem. Episodes were distributed through RSS feeds, which meant that every podcast player, big or small, could carry virtually every show in existence. With most other mediums retreating behind walled, algorithm-governed gardens like Facebook and YouTube, the podcast industry remained truly decentralized. (Substack)

Twitter is working on a feature that lets you control who can mention you, with the test version discovered by app researcher and engineer Jane Manchun Wong letting you block mentions completely. Twitter privacy designer Dominic Camozzi confirmed that the feature is in the works in a now-deleted tweet, and solicited feedback on it from the community. (The Verge)

While there’s nothing wrong with including “Address Line 2” in the shipping address form, our large-scale Cart & Checkout testing reveals that the “Address Line 2” form field can be a surprising hurdle for some users to overcome when filling out their address information. (Baymard Institute) 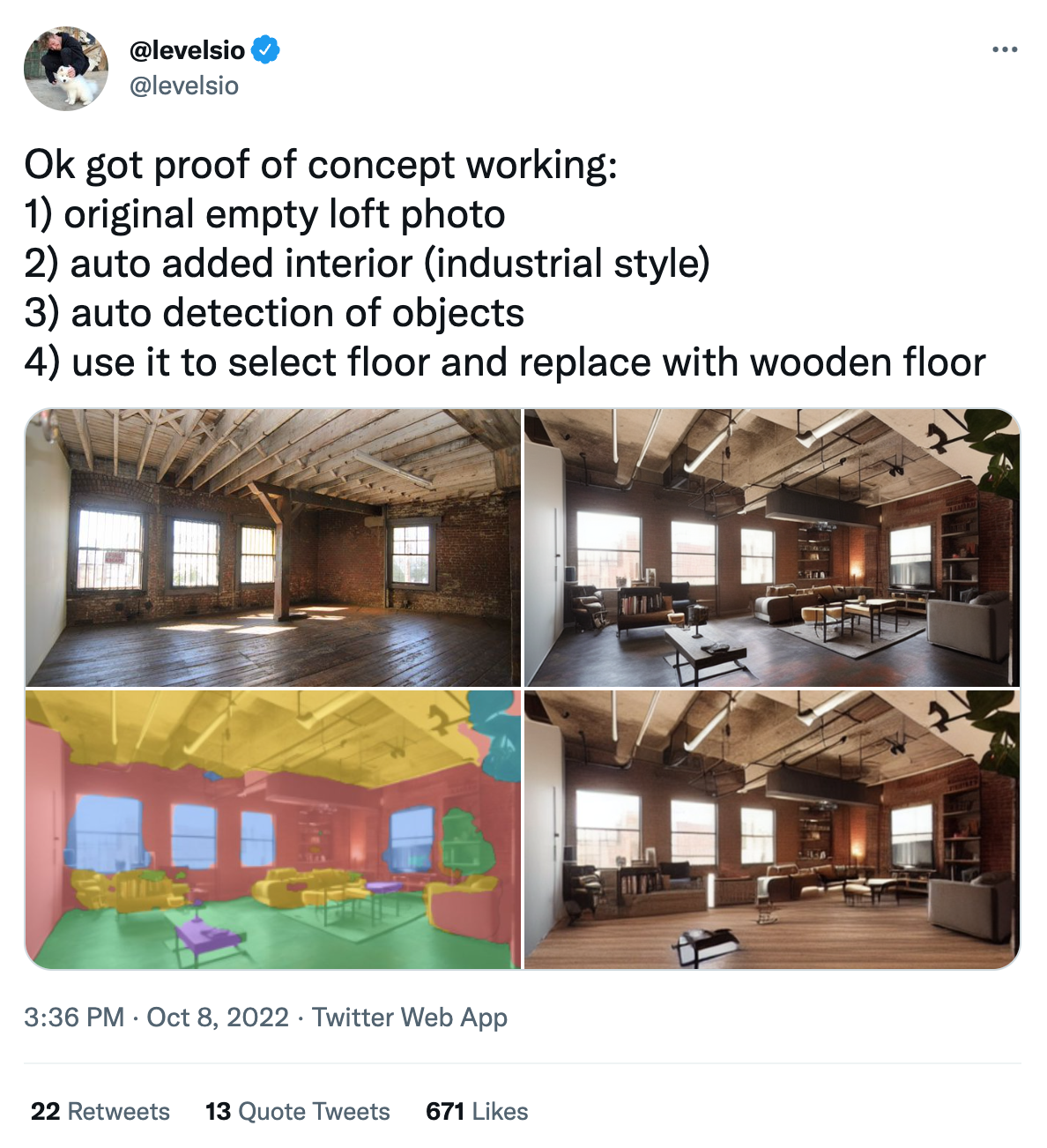 The next generation of AI-powered products is upon us, with new product use cases now in development. This new product can take a raw photo and generate multiple interior design options:

I recently caught up with Kat Holmes, SVP of UX and product design at Salesforce, about how she’s thinking about the challenges and advantages of working together in 2022 and beyond. Holmes wrote the book “Mismatch: How Inclusion Shapes Design” and spends much of her time contemplating the “next stage” of work, both with customers and internally with her own team. Our conversation has been lightly edited for length and clarity. (Protocol)

Webinar – How to Get OKRs Right with Christina Wodtke

Join Sendbird on Nov. 2nd at 11 AM PT for our webinar with Christina Wodtke, author of Radical Focus, and Dan Olsen, author of The Lean Product Playbook, as they discuss how to get OKRs right. We’ll cover when to use OKRs, what makes OKRs work, and how to roll out OKRs in your company without inciting a rebellion. (Sendbird Ad)

Now in its fifth year, the State of AI Report 2022 is reviewed by leading AI practioners in industry and research. It considers the following key dimensions: industry and commercial applications, politics, safety, predictions. (State of AI report)

Other product news in brief

Looking for your next role?

All yours, all free. Enter your email to receive your briefing.